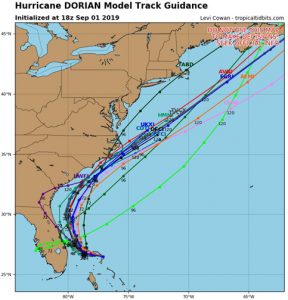 Aah Jim is a local coastal storm expert in disaster recovery who researches the hurricanes and gives no nonsense reporting about them in easy to understand language. Read his prior updates for important info about how hurricanes work, i.e. “It doesn’t matter what the top windspeed of a storm is if it stays out in the Atlantic. it does not matter what the wind speed of the narrow eastern eyewall of Dorian is doing if that eyewall is not expected to come close to Florida. No matter how big a hurricane is, once it drives completely up on land it dramatically weakens, it needs to hit a warm open body of water again before it can pose a major threat. ”
Jim writes: Time for the Dont Panic Weather update for 8pm. Dorian continues to stall out as it hits the Bahamas as all the models projected. It will remain in the Bahamas, creeping along barely moving west and drifting slightly north along the expected track until late Monday, early morning Tuesday. This will feel like the longest labor day in history waiting for it to finally move! All the major models then project that Dorian will head north paralleling Florida’s coast. This will bring it into progressively less warm waters and its winds are expected to drop to Cat 4 then Cat 3 as it moves north. The heavy rainfall and high winds battering the Bahamas are not expected to be repeated on Florida because Dorian is projected to remain off shore and never make landfall. The glancing blow from just the western edge of Dorian will have a wind speed of only about 44 mph. You can see the wind structure in the diagram below. The projected wind speeds for Florida’s eastern cities are 30-50 mph. See my last post for individual cities wind estimates, they haven’t changed since my 2pm post.

Dorian is expected to move slowly hitting the coast with 30-35 mph winds from the NE eroding beaches and adding to high tides by several feet on early Tuesday then after a few hours the winds will come out of the north at 30-35 mph and effect on high tides will be reduced. By late Tuesday expect winds out of the NW, the strongest winds we can expect from 40-50 mph. These winds will actually push water away from shore and reduce the high water levels. It will take almost another day to finish with the winds as they drop into the 30s out of the west on wed and then 20-30 out of the SW.

As Dorian moves north it will weaken and be subject to atmospheric forces that want to pull it east not west which is why all the major models agree that Dorian will not make landfall. See the diagram for the projections of the major models. Dont sweat the bizarre ones showing looping paths, not every modeler has a clue.

Cities in the center of Florida like Orlando and cities on the west coast like Tampa and Sarasota can expect winds of only 15 to 30 mph.

For fans of doom and gloom we asked the four horsemen of the Apocalypse for a quote on whether this was the end of the world and they said “Leave us alone fool, we are sleeping!” If you dont believe us wake them up a second time and see what they say!