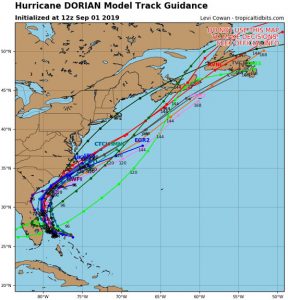 Aah Jim is a local coastal storm expert in disaster recovery who researches the hurricanes and gives no nonsense reporting about them in easy to understand language. He has a lot of relevant info here. He’ll give an update this evening since not much has changed since this 2pm post.  Aah Jim writes:
This is your Dont Panic Weather Update for 2pm EDT: The forecast for Dorian HAS NOT CHANGED!!! It is still projected by every credible source to not make landfall in Florida. The current projections fit in well with the total set of atmospheric conditions and predict a path that is historically common for hurricanes at this latitude. Once Dorian starts heading north it will hit progressively cooler waters and progressively stronger pressures to move off shore so the likelihood of Dorian turning much further west then the projections are not very high and get lower as it moves north. The overall wind speed of the storm is also expected to drop by 10-15 mph each day as it heads north over less warm waters. There are a lot of misleading info being circulated by media, local officials and facebook posts including a spaghetti projection showing landfall in Florida that is days old and proved to be inaccurate hours after it was created. Once again it does not matter what the wind speed of the narrow eastern eyewall of Dorian is doing if that eyewall is not expected to come close to Florida. So the recap:

RECAP:
Dorian is still not projected to make landfall in Florida.
There is no such thing as a Cat 6 Hurricane.
It doesn’t matter what the top windspeed of a storm is if it stays out in the Atlantic.
The earth is not flat.
We really did land on the moon.

Now back to what we do know. Dorian is projected to linger in the Bahamas until Monday night/Tuesday morning and then move north almost parallel with the coast of Florida. The relevant windspeed for Dorian is the western edge that is expected to impact Florida that is currently 44mph.

Always remember no matter how big a hurricane is, once it drives completely up on land it dramatically weakens, it needs to hit a warm open body of water again before it can pose a major threat. It is hard to imagine any reason to evacuate the west coast of Florida or central areas like Orlando unless you were in an area subject to flooding from heavy rainfall.

The models predict Dorian will move very slowly up the coast so expect strong wind gusts coming out of the NE then the north a full day before the max wind time for your city. Expect a full day of heavy gusts after the max wind time out of the west and then south west. You will know what part of the storm you are in from the direction the wind is blowing. The slow movement is expected to allow 2 to 6 inches of rain to fall along the coast.

Georgia and the Carolinas will get a close shave but no landfall expected anywhere. Though the expected windspeeds on land are not as impressive as the top speed of the eastern eye wall, expect well meaning local officials to call for mandatory evacuations of the barrier islands, possible interruptions in power and water.

A true storm surge is caused when the low pressure area under a hurricane swells the water column. If a hurricane drives straight at land as they once thought Dorian might, it can send a tsunami-like wall of water onto the coast. This will not happen according to the models. What will occur is wind driven waves from first the northeast, then the north, will batter the beaches the day before your max wind time. Fortunately the north winds will have less effect since they will blow parallel with the beach. Expect sea levels to rise several feet in the day before your max wind levels while winds are out of the NE. This will be problematic during high tides and where your neighbors have compromised the beach dunes. The NW and SW winds will actually blow water away from the coast during the peak wind conditions.

Yes the Bahamas is getting hit with huge winds and rainfall, that is consistent with what was expected and has no effect on what is expected in Florida. Do not let the fear-mongers fool you! Stay calm, stay away from fear mongering reports and fake news and dont spread fear to those in safe areas. We will continue to report the facts and leave out the drama throughout this event.

RELATED:  Andrea’s experiences with hurricanes and tropical storms
After what Hurricane Irma did to the Caribbean, we’ll be fine
Irma may hit near Miami Sunday, near Atlanta Monday
Here’s what the world’s most accurate weather model predicts for Irma
Mandatory evacuation, surviving Hurricane Frances, being the Vision Keeper
Be a vision keeper during the hurricanes
The phases of the moon drive hurricane behavior
Don’t add to the fear about hurricanes
Mild winter = mild hurricane season
Remember an active hurricane season doesn’t mean any will make landfall
I emailed news stations about a no cost plan for viewers to help with the hurricanes; global coherence
My Facebook posts for the Hurricane Matthew timeline