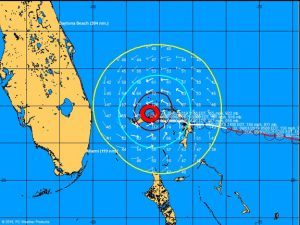 Aah Jim is a local coastal storm expert in disaster recovery who researches the hurricanes and gives no nonsense reporting about them in plain language. Read his prior updates for important info about how hurricanes work, i.e. “It doesn’t matter what the top windspeed of a storm is if it stays out in the Atlantic. it does not matter what the wind speed of the narrow eastern eyewall of Dorian is doing if that eyewall is not expected to come close to Florida. No matter how big a hurricane is, once it drives completely up on land it dramatically weakens, it needs to hit a warm open body of water again before it can pose a major threat. “

Jim writes:  Time for the 3 pm update from the Dont Panic Weather Service. Dorian continues to stall over Grand Bahama Island. Its wind distribution is indicated in the diagram. Grand Bahama will continue to be hit with the high speed eye wall of Dorian but expected top sustained wind speeds there have dropped to 94 mph.

The atmospheric forces pulling Dorian westward ran out of steam and now it is slowly being drawn northward. Models predict Dorian will remain in the region of the Bahamas until tonight and then move slowly northward parallel to the coast of Florida exposing coastal cities to its lower strength 40-50 mph winds from its western edge. Storm surge is expected to be 2-7 feet with the most likelihood being close to the middle of that range and dropping as initial winds Tuesday morning and afternoon shift from north to northwest and then west pushing water off the coast. Dorian will weaken as it moves north dropping to a low cat 4 then a cat 3 as it passes by Cape Canaveral. It is expected to take all day Tuesday to arrive and all day Wednesday to leave. Once Dorian starts moving strongly north it is possible that slowly over time it picks up speed faster then what is currently predicted. Not wind speed, the speed of the storms advance northward.

Expect the max winds from the NW sometime Tuesday night/ Wednesday morning depending on where you are. Rainfall is expected to be 2-6 inches. Short wind gusts on the beach and open areas like the Indian River Lagoon will exceed 75 miles per hour. Expect fear mongering media to quote all sorts of wild predictions about gusts in the Bahamas and in Florida because its harder to incite fear with the actual predicted wind speeds. Take care driving in open areas like bridges and causeways, the crosswinds will be severe. Secure movable objects, even 40 mph winds can make anything a potent projectile. Expect power outages especially on the barrier islands due to the lack of buried power lines. Not much new info expected until Dorian slowly starts to make its move late tonight/tomorrow morning. Even then Dorian will crawl like a slug up the coast.