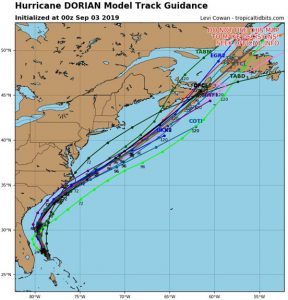 Aah Jim is a local coastal storm expert in disaster recovery who researches the hurricanes and gives no nonsense reporting about them in plain language. Read his prior updates for important info about how hurricanes work, i.e. “It doesn’t matter what the top windspeed of a storm is if it stays out in the Atlantic. it does not matter what the wind speed of the narrow eastern eyewall of Dorian is doing if that eyewall is not expected to come close to Florida. No matter how big a hurricane is, once it drives completely up on land it dramatically weakens, it needs to hit a warm open body of water again before it can pose a major threat. “

Jim writes:  This is your Dont Panic Weather Update for 1130PM EDT.  Dorian has finally started its first baby steps north.  Shown is the projected path of Dorian, the models are very tight and should be very accurate at this point. If you’ve followed these updates from the beginning you will remember I pointed out the weaknesses in the models at every step so when I have confidence in them now it is because the conditions reflect their predictions accurately.
Sadly for the Drama Queens in the media and some of your Drama Queen friends, the actual expected wind speeds are half or a third of their great fears since the western edge of Dorian that is expected to impact Florida has wind speeds of 40-50mph. Expect the media to continue to harp on short gusts of winds of greater than 75 mph but the expected max sustained winds are as follows:

Here are the max wind estimates for away from the coast.

Orlando max wind spd 30 max from the NW Wed 6am
No effect on winds on the west coast of Florida.

It will be gusty all day Tuesday, with winds from the North, once they turn NE you are getting the worst of the winds. When they turn west going into Wednesday the storm is moving past you and when they are out of the southwest late wednesday the storm has past.

Storm surge is expected to be 2-7 ft with a middle value most likely. Ocean heights will be suppressed once the winds shift to the NW which will be their highest speeds, pushing water away from shore. So Calm the F down! Things will be alright!